It didn’t take me long to find out that there is more to Trinidad than meets the eye. My visit to Pointe-a-Pierre Wildfowl Trust, a wetlands conservation site a little more than an hour south of Port of Spain, illustrates vividly that first appearances do not tell the whole story.

The uniformed guard bent down and looked into the car, scanning our faces. My companion indicated our purpose, and with a nod, the officer let us pass. We headed directly toward a vast industrial wasteland of smokestacks, rusted cranes, immense metallic storage tanks and barbed wire fences, above which black smoke belched and flames scorched the sky.

Bearing off to the right, we soon crossed an invisible threshold into another world. We rode gentle hills through a stylish community of elegant houses with lush manicured lawns and beautifully landscaped gardens. We passed the tennis courts of a members-only club and an adorable Anglican chapel.

In no time, I found myself transported to still another realm, following a muddy path around a lake teeming with wildlife, surrounded by verdant jungle vegetation dripping with condensation. The steamy air was sweetly-scented and reverberated with the sounds of flapping wings and a cacophony of calls and cries.

Pointe-a-Pierre Wildfowl Trust, Trinidad lies on the island’s Gulf of Paria coastline, north of San Fernando. It is the site of the island nation’s oil refinery, run by Petrotrin, the state-owned oil company. Trinidad has a diversified economy but is rooted to a large extent in oil and natural gas export.

Pointe-a-Pierre Wildfowl Trust Trinidad was built for and is populated by employees of the oil company, my guide Michele Farah explained.

“My sister-in-law lived here as a child in the late fifties up to the early 1970s and considered it a beautiful place to grow up,” she said. “There was free housing, and the compound included a school, a golf course, and a swimming pool. Children could roam all over the place and have a safe and wonderful time.”

Today, children of all ages delight in a surreal sort of hide-and-seek very nearby, discovering an alternate universe within the petrochemical production plant. Tucked away beyond Pointe-à-Pierre’s oil rigs and the suburban scene is the Wildfowl Trust. The nature preserve encompasses two lakes on about 25 hectares of land, where locally endangered wetland birds are bred and re-introduced to the environment.

Founded in 1966, Pointe-a-Pierre Wildfowl Trust has been led since 1981 by Molly R. Gaskin, whom I met in the Learning Centre. Nestled on a small hillock above one of the lakes, this rustic space swirls with the vibrant color and energy of a wide assortment of birds that dart, strut and dive in the surrounding flora. The Centre houses information on the local organisms and their habitats, a unique mollusk collection and a small, but comprehensive Amerindian Museum.

I learned that the Amerindians believe that reality has different levels, which are all inter-connected. Because of the mystery of childbirth, women are identified with the lower, subterranean level. Man represents the middle layer, or the earthly plane as we know it. The spirit world is associated with bright and good things, like the sun, hummingbirds and eagles. Spirits made the rules which govern existence and regular communication is needed to conform to standards of right living.

Molly explained that the Trust has long been involved with environmental education therapy for the physically and mentally challenged, the elderly, victims of substance abuse and battered women.

“We believe that in nature, one is uplifted and refreshed and that this bond can and does provide a valuable mental and spiritual boost and release for the handicapped and the ill, indeed for every one of us,” she asserted.

“We also believe that all religious and spiritual leaders have a great responsibility to the people and that they have the means to guide, educate, enlighten; to shape a better society and bring about positive change through counseling and in all places of worship, spiritual and moral values,” Molly stated.

This philosophy is one that resonates with Gail Mohammed, who organized my Trinidad itinerary. As we got to know one another, she shared her story with me.

Gail Mohammed: Faith and $4 in Her Pocket

"At age 15, I attended a Convent Secondary School, and changed from being a Muslim to become a Roman Catholic, eventually joining the Convent and training to become a nun,” she told me. “Then I met a boy and fell in love for the first time–only to find out too late what a bad person he was. I was battered very, very badly."

Gail’s faith enabled her to emerge from domestic violence as a stronger person. With $4 in her pocket, she went on to found a business as a tour operator. Focusing on sharing her love for her country and its people, she has carved out a niche in which she introduces visitors to the island’s diverse cultural and spiritual heritage and practices.

"I love my island and will always strive to make it better in my little corner," Gail told me.

I had embarked on my journey to Trinidad at a time when a cross-road loomed for me, one that I faced with some trepidation. While there, I encountered Pointe-a-Pierre Wildfowl Trust and Gail Mohammed, both epitomizing an ideology that is transformative and healing.

Sometimes, the “good” in a situation may be hidden or obscured, but it is always there if we look for it. If I can trust that the difficult or confusing passages in my journey will eventually reveal themselves to have meaning and purpose, I can find it easier to accept those dark periods. More and more I can see how those shadows are necessary to fully appreciating the light.

I am guilty of Neglect when I show no concern for the welfare of my country.

I am guilty of Destruction when I burn my forests, deface my hills, and cut down my beautiful trees without thought or feeling.

I am guilty of Pollution when I dump rubbish and refuse wherever I go.

I am guilty of Inconsideration when I litter because I show disregard for the feelings and rights of others.

I am guilty of Cruelty when I kill any creature without concern for its destruction or care for the young.

I am guilty of Indifference when I destroy my Parks, Savannahs and natural reserves, bringing to extinction many species of wildlife that can be found nowhere else in the world.

I am guilty of Disease when I pollute our rivers, marine life and sea beds, and contaminate our atmosphere.

I am guilty of Wantonness when I slaughter any of our wildlife without a thought to the future, or my children’s children.

I am guilty of Thoughtlessness and Stupidity when I exterminate any form of life, for once lost, they are lost forever.

I am equally guilty as those who perpetrate such acts of destruction when I remain unconcerned, passive and inactive.

Guilty? Indeed I am guilty if I do not pay heed to the signs of regression and danger, for I am creating a wilderness, barren and destitute, for myself and for many generations to come.

I CREATE A BETTER TOMORROW WHEN I PLANT A TREE, SAVE SOME LIVING THING, PREVENT SOME DESTRUCTION AND TEACH ANOTHER HOW TO CARE.

I AM RESPONSIBLE NOT ONLY FOR MYSELF BUT FOR ALL HUMANITY, FOR WHAT CONCERNS ONE PEOPLE, CONCERN ALL PEOPLES.

The Best of Armenian Culture Presented by Locals 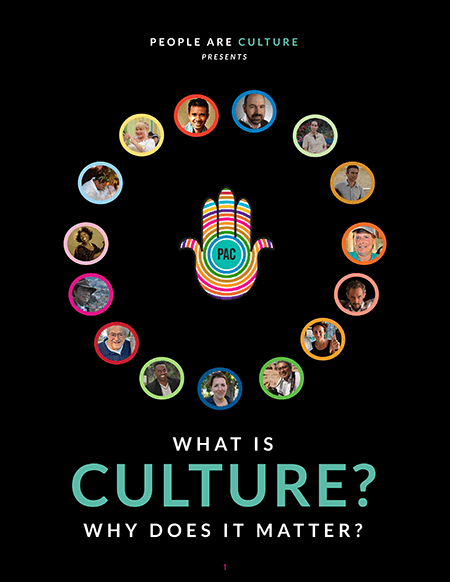 BUY IT ON AMAZON

Flip the Lens is a revolutionary platform for creating powerful and meaningful content about our shared humanity.

6. Examples of Sustainable Tourism Recommendations from Experts Around World

Are you a culture lover? Curious about what is the meaning of culture? People Are Culture shares personal stories that reveal how culture is universal and unique. In profiles and interviews, people from around the world & all walks of life offer powerful insights about their culture and its history. In sharing their heritage and traditions, they also reveal their own transformational life lessons and spiritual practices, world-changing ideas, dramatic adventures, and hard-won wisdom. People are Culture. Connecting is the Destination.