The Camster Cairns in Scotland are imbued with ancient secrets. More than 100 miles north of Clava Cairns is a region known as “Flow Country.” This name for the Caithness and Sutherland areas of northeast Scotland comes from a Scots term for an area of flat, wet bog, typically with pools. It is the largest expanse of bog in Europe, covering about 1500 square miles.

Driving down a one-track lane through this wilderness, the damp drizzle accentuated the eeriness of the lonely moor and silence settled over me and my companions Gilbert and Johanna. The melancholy mood evoked by the terrain was heightened by the occasional appearance of the crumbling ruins of homesteads abandoned in The Highland Clearances when the clans were forced off the land in the name of progress. 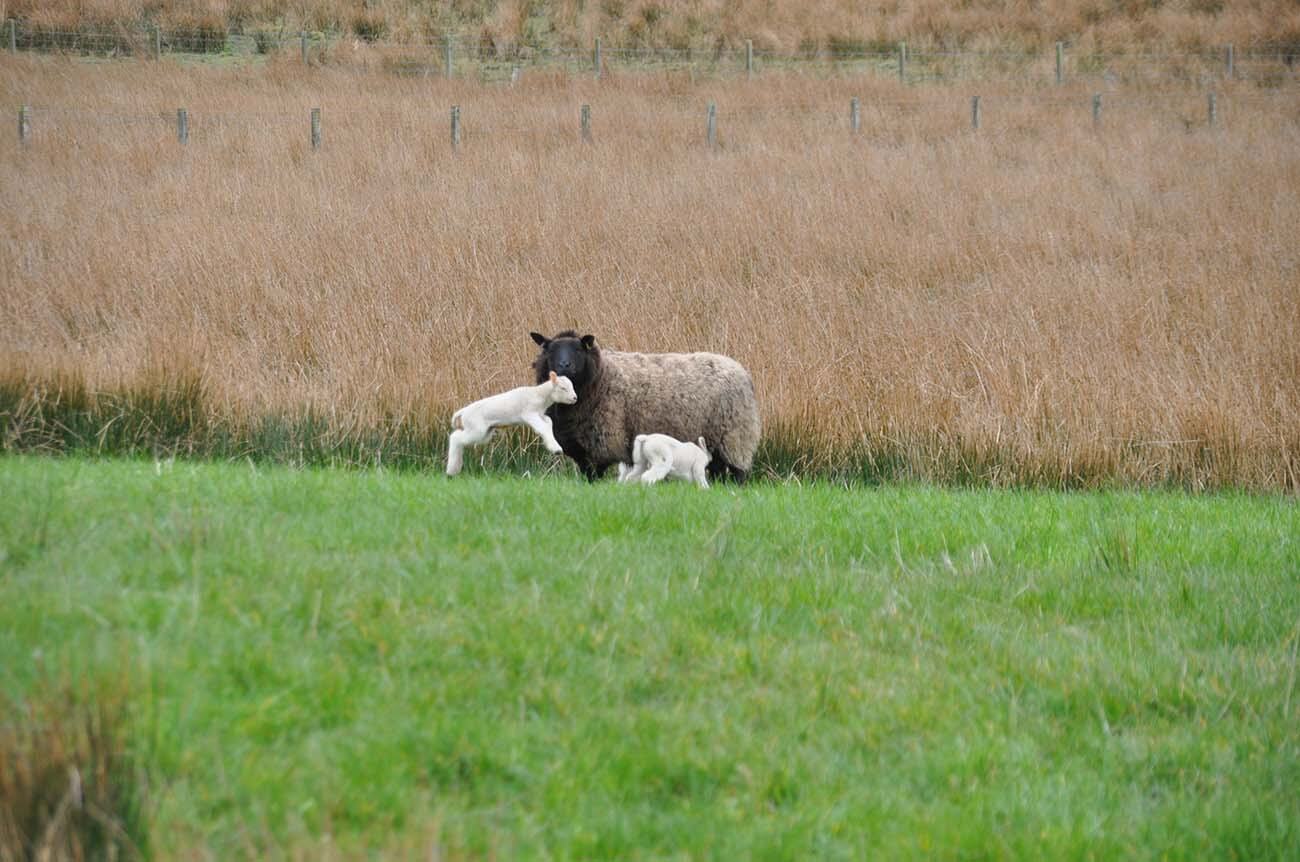 Remote Location Has Been Farmed For Millennia

Cresting one of the rolling hills, I was surprised to see a red car on the roadside, the driver seemingly engaged in a conversation with a sheep and two tiny lambs. The animals had somehow escaped through the fence that lined the road and were separated from the herd fanned out over the moor. Even in this desolate landscape, spring’s cycle of life was in full glory and I laughed with delight at seeing dozens of adorable lambs frolicking. Ahead of us, the farmer used the nose of his car to herd the animals down the road and through a gate to re-join the rest of the flock.

A little further down the road, we arrived at the home of the farmers we had come to see. Set far back from the road, their stone dwellings were reached by a long boardwalk that stretched out over the thick brown tufts of peat, heather and mosses. 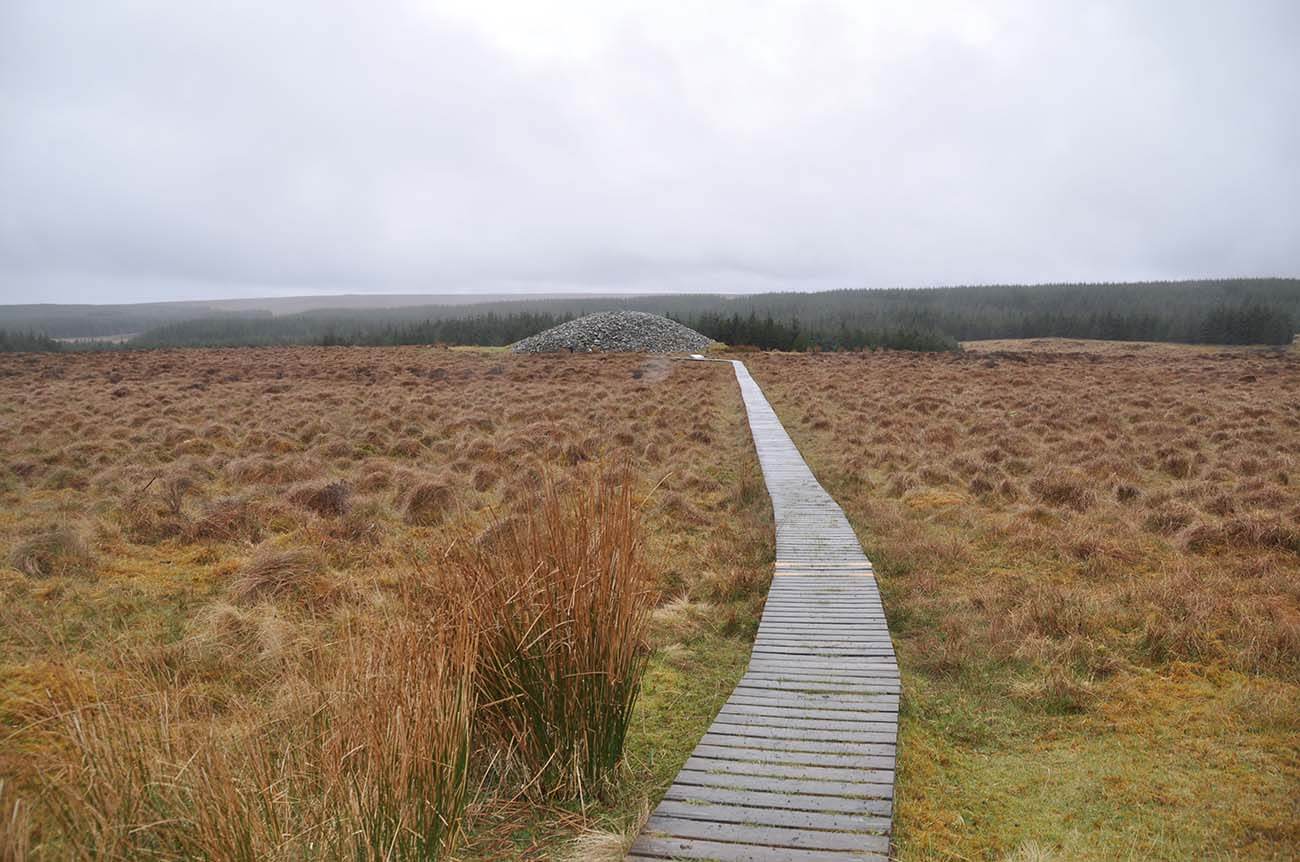 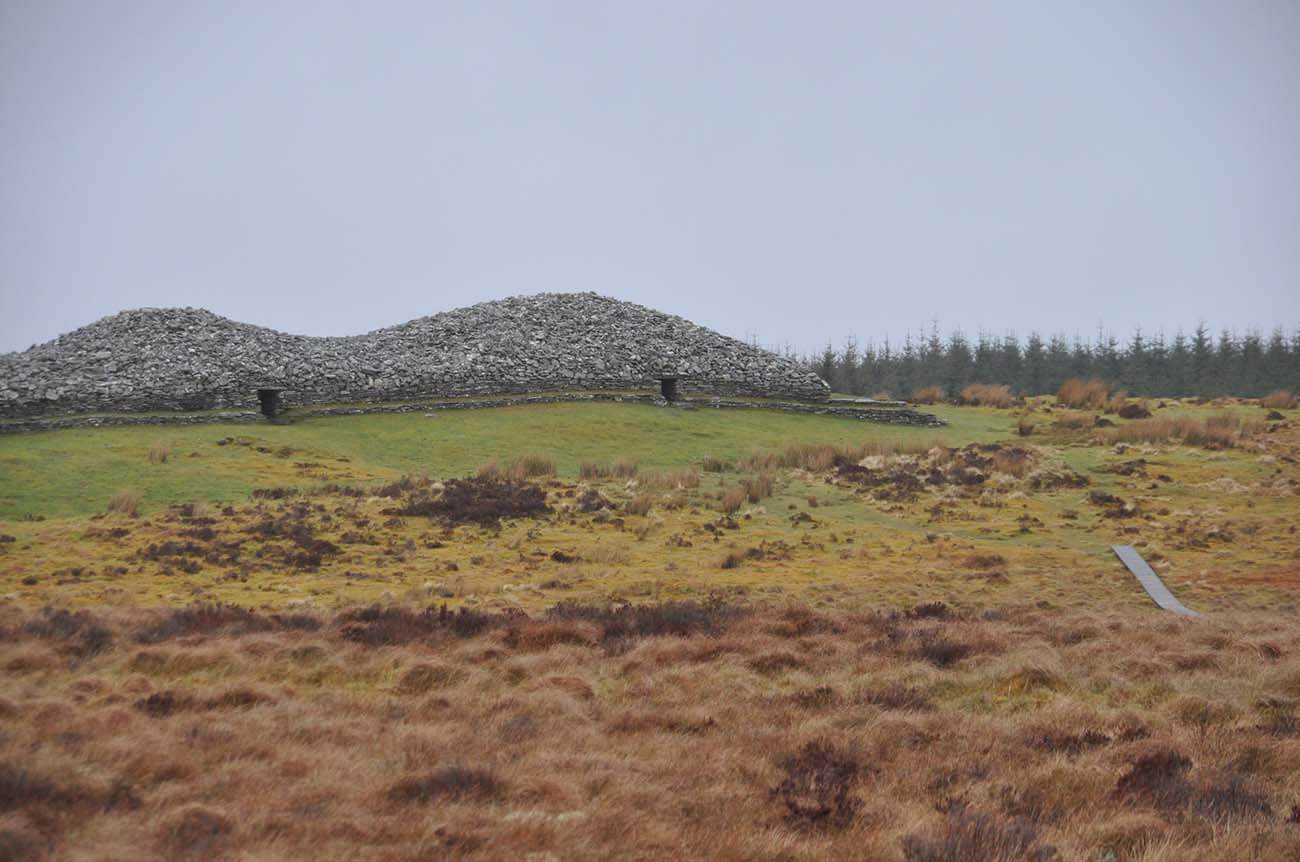 Reaching the front door, Gilbert and Johanna got down on their hands and knees to enter. No, we weren’t calling on Bilbo Baggins but paying respects to the Neolithic residents of the Grey Cairns of Camster.

Later, I was able to get some historical context on Flow Country from Dr. Kirsty Owen. She is Deputy Head of Archaeology at Historic Environment Scotland and an expert on the final resting place of these Neolithic farmers.

“Before the deep blanket of peat covered Caithness during the Bronze Age, this corner of the British Isles was good farming land,” Dr. Owen told me. “These two great mounds were where some of those farmers were laid to rest.”

“The two Grey Cairns of Camster are among the oldest stone monuments in Scotland,” said Dr. Owen. “They were built over 5,000 years ago. Even before their excavation and restoration by Historic Scotland in the later 20th century they were two of the best preserved burial tombs surviving from the Neolithic period anywhere in Britain. Their location – on a windswept moor in the heart of the Caithness ‘Flow Country’ – probably ensured their survival from the ravages of later farmers.”

“The Grey Cairns of Camster are the most recognisable monuments in Caithness,” she continued. “These cairns provide an insight into the ritual beliefs and practices of people living in northern Scotland about 5750 to 4500 years ago. As is common with Neolithic monuments in Caithness, these burial monuments form part of a group.”

Camster Cairns | On The Edge of Inhabited Landscape

Dr. Owen explained they comprise a reconstructed Neolithic long cairn and about 200 meters to the southeast, a round cairn. The long cairn is about 60 meters long and has two internal chambers, entered from one of its long sides, with forecourts at each end. The round cairn is about 19 meters in diameter and has a single chamber sub-divided into three parts.

“Tombs such as the long cairn tend to be located in prominent places on what would have been the edge of the inhabited landscape; domestic activity and settlement were separated from areas and activities involving the dead,” Dr. Owen said. “The interiors of the tombs were used for the burial of human remains, and the forecourts are regarded as having had a ritual function, where activities could have been visible to more people than were able to see what went on in the tombs. However, we cannot determine the precise nature of the burial rites at Camster.”

Dr. Owen said the cairns do provide insight into the skills and technical expertise of early prehistoric farming communities in northern Scotland. She pointed out that their construction involved access to substantial resources of stone and people, and this would have required considerable organization.

The Study of Ancient Material Culture

I asked Dr. Owen what inspired her to make a career of studying the ancient past.

“I am motivated by a desire to find commonalities in the way in which people make sense of their world, particularly the bits of it which were not readily comprehensible before the scientific endeavor,” she responded. “The study of material culture, the things which people leave behind, is an opportunity to gain an insight into that world and also, if we are very lucky, a window into individual identities, thoughts and desires.”

Indeed, this ancient memorial on the moors of the Scottish Highlands offers a unique landscape for all those who seek both a sense of wonder and spirit of connection.

BUY IT ON AMAZON

Flip the Lens is a revolutionary platform for creating powerful and meaningful content about our shared humanity.

6. Examples of Sustainable Tourism Recommendations from Experts Around World

Are you a culture lover? Curious about what is the meaning of culture? People Are Culture shares personal stories that reveal how culture is universal and unique. In profiles and interviews, people from around the world & all walks of life offer powerful insights about their culture and its history. In sharing their heritage and traditions, they also reveal their own transformational life lessons and spiritual practices, world-changing ideas, dramatic adventures, and hard-won wisdom. People are Culture. Connecting is the Destination.