There is no better way to understand Old Quebec history than through its unique architecture, which reveals the story of the city’s diverse cultural influences that include French, British, Romantic and Art Deco. Old Quebec was declared a UNESCO World Heritage Site in 1985—close to half of its buildings were built before 1850 and it is the only walled city in North America. This historic center represents just five percent of Quebec proper—but the architectural gems of its 333 acres will enchant visitors for days.

Émilie Vézina-Doré is well-qualified to offer an overview of some of Old Quebec’s built heritage. Currently a Heritage Development Advisor for the City of Quebec, she was previously Executive Director of Action Patrimoine, a national organization that has been working since 1975 to protect, enhance and publicize Québec’s built heritage and cultural landscapes. Emilie also served as a research officer for Patri-Arch, a heritage and architectural consulting firm, where she conducted analysis of the historical, architectural and landscape analysis of buildings located in the City of Sainte-Thérèse. Emilie holds a Master’s degree in planning and conservation of the built environment and a Bachelor’s degree in visual arts and art history.

Meg: How do you define “cultural landscape” and “built heritage”?

Emilie: In its recently adopted Heritage Vision, the City of Quebec defines heritage as follows: Reflecting our identity, heritage is defined as the set of tangible and intangible goods, natural or cultural, inherited from the past and shaped by everyday life, that we recognize, protect, preserve, highlight, appropriate, transmit and continue to enrich.

Meg: Can you give an overview of Old Quebec in terms of a brief history and what it encompasses?

Emilie: The heritage site of Old Quebec is an urban area of approximately 135 hectares. It is made up of two distinct areas, an upper part on the Cap Diamant promontory and a lower part on a strip of land between the escarpment, the Saint-Charles River and the St. Lawrence River, at the very spot where it is located. stream is narrower. It includes nearly 1,400 buildings built from the seventeenth century that form a diverse built environment evoking its main commercial, cultural, financial, institutional, military, religious and residential. The site bears witness to four centuries of architecture and includes French-inspired buildings, classically inspired buildings, as well as examples of the major architectural trends of the 19th and 20th centuries.

It includes the walled city located in the Old Quebec City-Haute-Ville district, as well as portions of the Old Quebec City-Lower Town, Cape Blanc (west) and Saint-Roch (north) neighborhoods. It has a number of protected heritage properties. Numerous archaeological sites listed on the Inventory of Quebec Archaeological Sites, reflecting the presence of Aboriginal and Euroquent, are also associated with the site.

The heritage site of Old Quebec is inscribed on the UNESCO World Heritage List. Certain areas of Old Quebec are also national historic sites of Canada, including the Fortifications of Québec National Historic Site. 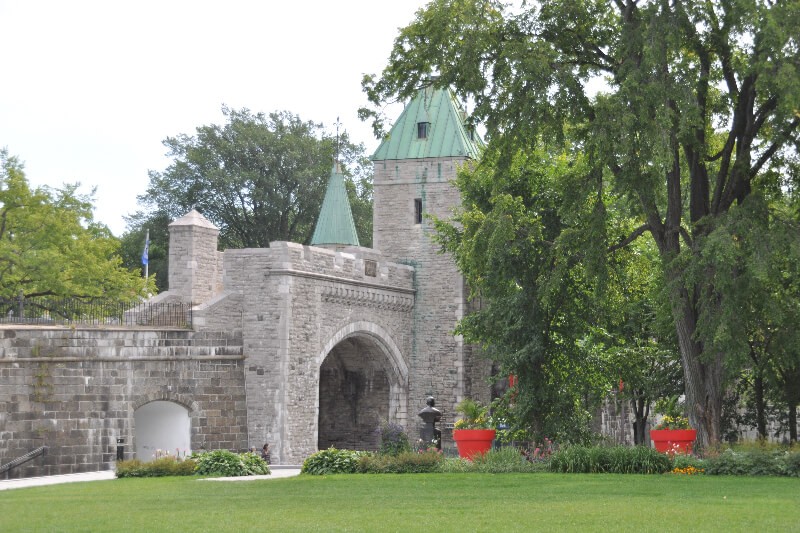 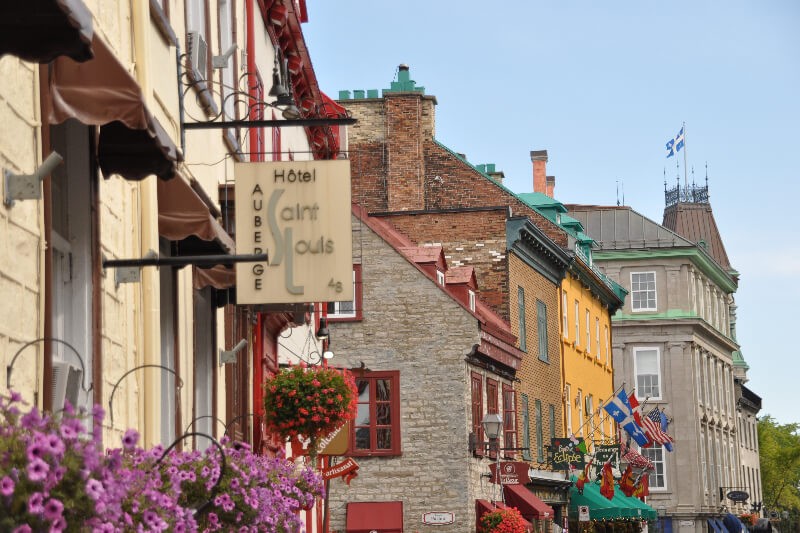 Read: Are you a fan of architecture? Check out our new interview with architect Špela Kuhar for the back story on the built heritage of Ljubljana, Slovenia!

Meg: Quebec is truly an international city that has been shaped by many influences. Could you offer some context and commentary on the historical role of the French in the city’s built heritage, including the impact of religious orders? If you can single out at least a couple of structures that are a “must-see” for visitors, and why they are significant, that would be great.

Emilie: The first monumental buildings of the city, like the Seminary, the monastery of Ursulines, the Hôtel-Dieu and the church Notre-Dame-des-Victoires, were built according to the rules of French classicism. On the residential side, the first houses built in Quebec remember the French regional architecture, essentially Breton and Norman. From these forms of basis, the climate, the precarious conditions of their owners, the materials available as well as building regulations and ordinances have shaped a local residential architecture.

For more than three centuries, the Augustinian community managed the Hôtel-Dieu de Québec, which it ceded to the government in 1962, in the wake of secular reforms in health and education. Today, due to the non-renewal of its workforce, the congregation has launched a vast project to transform the monastery.

The project ensures the sustainability of the built heritage and rich collections that the Augustinians have accumulated over time. Their museum has been refurbished to showcase the most valuable artifacts, some dating back to the 17th century. The collection related to the history of medicine is particularly highlighted. In addition, this project guarantees the continuity of the Augustinians’ mission, since the monastery houses a healing and accommodation center dedicated to supporting caregivers, thus perpetuating the vocation of assistance practiced with dedication and consistency by the Augustinians of Quebec.

Meg: Old Quebec’s architecture includes impressive structures influenced by the Romantic movement. Can you explain the principles of this style and describe a couple of examples of architecture built in this style?

Emilie: Characterized by the reminders of medieval architecture and more particularly military architecture, the Château style appears in Quebec at the end of the 19th century when some of the gates of the fortifications were rebuilt (around 1878) and the Manege militaire was built. Created by Eugène-Étienne Taché (1886) that style harmonizes with the picturesque side and the European charm of the city. When the Canadian Pacific decided to build a large luxury hotel in Quebec, Taché designed the “Fortress Hotel” which refers to the castles that dominate the Loire Valley. Even if the building projected by Taché does not see the day, it will have a great range since the Château style that it proposes will be taken over by the American architect Bruce Price during the construction of the Château Frontenac (1892).

Therefore, this distinctive architecture is associated with the city of Quebec. This style then spreads from coast to coast, as the Canadian Pacific Railway will make its official style for the various hotels it operates across the country. The Château style, redeveloped in the 1920s by the Maxwell brothers with the construction of the central tower of the Château Frontenac which highlights the silhouette of the city, will also be adopted by the federal government for some public buildings erected in the 1920s and 1930, including post offices and administrative buildings.

The Château style is still considered today as one of the distinctive features of Canada. The Château style is characterized by the use of elements borrowed from the castles of the Middle Ages and the Renaissance. Castle-style buildings are usually made of stone masonry, but red-brown brick is also sometimes used, as is the case at Château Frontenac or the Palais station, which indicates an influence of neo-Gothic models.

Meg: Art Deco is also a presence in Old Québec. Can you describe a couple of buildings in this style and share a little bit of their history?

Emilie: The Art Deco icon in Old Québec is the Price Building. The building was erected in 1929-1930 for Price Brother’s Company according to plans by Ross & Macdonald.

The building refers in its aspect to its period of construction. It presents the characteristics of the Art Deco architecture in vogue during the 1920s. It has 16 floors in freestone with withdrawals in certain places to clear balconies. The whole is framed by a copper roof with four sides and a fireplace decorated with motifs. The main decorative elements are pinnacles and a monumental entrance arched.

The building is included in the perimeter of the historic district of Old Quebec. Maintain its volumetry and architectural components.

It’s neighbor, the Clarendon Hotel: The building was erected in 1927 for the hotelier Joseph Drapeau according to the plans of Raoul Chênevert.

The building refers in its aspect to its period of construction. It presents the features of the Art Deco architecture in vogue in the 1920s. It features seven brick floors with artificial stone inserts. The main decorative element is the marquise ornamented with Art Nouveau motifs in wrought iron, patterns that are also found on the access doors.

Meg: UNESCO designated Old Quebec a World Heritage Site in 1985. Can you describe what the criteria is for this designation and how Old Quebec meets that criteria?

Emilie: Two main criteria were applied to Québec City—its built heritage and its historical heritage. The first concerned the coherence and remarkable degree of preservation of the city’s built heritage. With its French, then British architecture, and its practically intact fortifications, Old Québec is the best preserved and most complete example of a fortified colonial town north of Mexico.

The second criterion has to do with Québec’s history and culture. UNESCO has recognized Québec as the cradle of French civilization in North America and as illustrating one of the major stages in the European settlement of the colonization of the Americas by Europeans.

Meg: What is your favorite building and why?

Emilie: The Maison de la littérature library is one of my favorite building. It’s contemporary addition makes a perfect dialog with the old Wesleyan church. It is established as the first neo-Gothic church in Quebec City and, at the other end of its history, as the first church to have undergone a conversion program that respects its architectural qualities.

The building known as the Canadian Institute is actually the former Methodist Church of Quebec. This religious building was built in 1848 according to the plans of the architect Edward Stavely to serve as a place of worship for this community. It is built of Deschambault stone with counter forts and pinnacles. These arrows give the desired verticality for a religious building and avoid the construction of a steeple. Built in neo-Gothic style, it is the first church of this style built in Quebec City. By its simplicity, it is in line with the Commissioner’s Churches of England.

Read: Travel south from the Canadian border into Maine, where Best Cultural Destinations details the best things to do in mid-coast and down-east Maine!

Meg: What are the responsibilities of your role as Heritage Development Advisor at Ville de Quebec?

Emilie: I am in charge of the implementation of the Heritage Vision, I am working in collaboration with the Table de concertation du Vieux-Québec, realisation of inventories of built heritage, communication and awareness through various projects of the City.

Meg: What are some of the challenges to the integrity of Old Quebec’s architecture, for example., the fire at Manege Militaire and how are they being addressed?

Emilie: Built in 1885 by Eugène-Étienne Taché, the building underwent an exemplary reconstruction following the fire that partially destroyed it in 2008. In its restoration, the architect was able to enhance the heritage character of the historic building. while incorporating elements of contemporary architecture.

Are you an architect aficionado? If you want to continue learning about the world’s most beautiful architecture, click to read an interview with Peter Trowles about Glasglow’s built heritage!

People Are Culture features stories, interviews, podcasts, photo essays and videos about culture, traditions, heritage, and our human condition. People are Culture. Connecting is the Destination.